This post is part of our Learn, Pray, Join: Mass Incarceration series. This post is a modified version of a post that was originally shared on the Casa Alterna blog. Reprinted with permission. 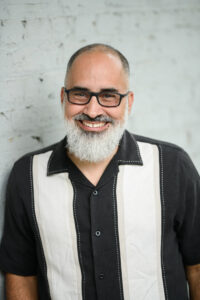 Anton Flores-Maisonet is co-founder of Casa Alterna, a ministry of hospitality that serves asylum seekers who have recently arrived in the U.S. During the pandemic alone, Casa Alterna has hosted nearly 500 asylum seekers, from more than 50 countries, at the Atlanta Friends Meeting, where Anton and his spouse, Charlotte, reside. In September, Casa Alterna launched a new community house, where asylum seekers and U.S. citizens live together in solidarity and mutual support. Atlanta Mennonite Church owns this house, and Anton and Charlotte are members of that congregation.

“B” turned to me, just before loading into the car that would take him to the airport to reunite with his wife, and he pronounced a blessing.

“This week, God will do that which seems impossible for you and those you love. God will bless your life and fill it with overwhelming joy, because God is a good God.”

Words of gratitude often come in this ministry of hospitality. Joy is a defining characteristic of the asylum seekers we welcome into this place of sanctuary.

B.’s story is not unlike that of many of the other guests we’ve welcomed at Casa Alterna. He and his spouse left Haiti about four years ago. Natural disasters, political assassinations, corruption and grinding poverty led this young couple on a long journey in search of a dignified and peaceful life. They traversed open waters and foreign lands. B. even learned Spanish, as he spent those four years toiling his way through Latin America en route to the United States.

B.’s spouse was pregnant when they arrived at the U.S. border. ​To request asylum, the two had to demonstrate to a U.S. official that they had what the government calls “credible fear of persecution” in their home country. While our government deliberated, the young and courageous couple was taken into Immigration and Customs Enforcement (ICE) custody and confined in separate private detention centers that form a part of our nation’s intricate web of mass incarceration.

Then the unspeakable happened; B.’s beloved suffered a miscarriage.

In our brief, but intimate, conversation, B. never projected blame for the death of his unborn child. Of course, B. was grieving; he never intended to be separated from his spouse when they followed the “legal way” to seek safe refuge in this country. B. never blamed God, himself, the arduous journey or any governmental entity for this soul-piercing sorrow. I chose not to mention to him that my spirit was pointing an accusatory finger at the immigration detention system that has notoriously treated women’s healthcare as an afterthought.

To hear this dispossessed man speak confident words of faith and blessing into my life was as jarring as it was humbling. I wanted to apologize to B. for our country’s economic and immigration policies, for the way we discard his humanity, his Imago Dei. I felt embarrassed that it was he, the recipient of our hospitality, who was showering me with blessings, at a time when, if I’m honest, I needed to hear those words of unconditional affirmation.

B. offered a genuine blessing that welled up from an authentic faith that has stared at death, in all its ugly forms, and still clings to a hope that resurrects.

Encounters like this remind me of the holiness of hospitality and companionship. To be fully present, even if just for a moment, with one of the millions of displaced peoples of this earth is a true privilege.

Out of respect for the confidentiality of B., I’ve not shared his first name. But as I write this, I realize my interaction with B. was a living testimony to the beatitudes that Jesus preached to the poor. B.’s life testifies ​to ​what is often called the “upside-down” kingdom of God.

Blessed is B., for his is the kingdom of heaven.

Blessed is B., who comforts others, even as he mourns.

Blessed is B., whose meekness has taken him all over the earth.

Blessed is B., whose righteousness fills the heart.

Blessed is B., whose words of mercy portray his confidence in a merciful God.

Blessed is B., for, in the purity of his heart, he sees God.