Human trafficking and the rescue paradigm 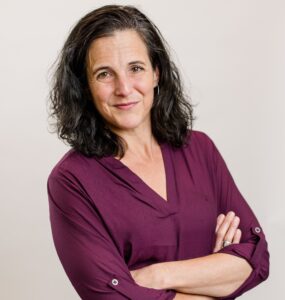 Yvonne Zimmerman is the associate academic dean and associate professor of Christian ethics at the Methodist Theological School in Ohio. Author of “Other Dreams of Freedom: Religion, Sex, and Human Trafficking” (Oxford University Press, 2012) and numerous other articles and chapters on the movement to end human trafficking, her scholarly work explores how the issue of human trafficking is framed for and understood by the American public, and through which strategies and actions people are working to end it. She holds a Bachelor of Arts from Goshen (Indiana) College; a Master of Theological Studies from Candler School of Theology, Emory University, in Druid Hills, Georgia; and a Ph.D. in religious and theological studies from the University of Denver (Colorado) and Iliff School of Theology. Zimmerman is a member of Columbus Mennonite Church in Columbus, Ohio.

Human trafficking is a remarkable issue, because in today’s highly politicized and polarized world, it is an issue everyone seems to agree on: Human trafficking is wrong and should end. Because of this consensus, it’s easy for engaged citizens to applaud and enthusiastically support the introduction of antitrafficking initiatives in their communities. However, as engaged citizens who are Jesus-followers, we need to examine these initiatives more closely, paying attention not just to the stated intent of ending human trafficking but also paying attention to the effect it has, as these initiatives are implemented in particular communities and neighborhoods.

The U.S.’s flagship anti-trafficking statue, the Trafficking Victims Protection Act, was passed in 2000 and made human trafficking a federal crime, punishable by up to 20 years in prison. Since then, almost every state has followed suit by passing state laws that attach stiff criminal penalties to human trafficking. To enforce antitrafficking laws, many jurisdictions have expanded the prerogative of law enforcement to detain people on suspicion of prostitution. Reflecting the rescue paradigm’s framing of trafficking as “sold sex” and consistent with its goals of catching perpetrators and rescuing victims, the rationale is that cracking down on prostitution will undercut the stability of the sex industry, get people who sell sex off the streets and, possibly, rescue some trafficking victims in the process.

A closer look at the way that antitrafficking crackdowns on prostitution are carried out reveals that these operations often disproportionately (and devastatingly) impact people of color. Study after study shows that law enforcement initiatives to get tough on prostitution — including those that treat defendants as victims of human trafficking — tend to specifically target people of color who are involved in the street-based sexual economy. For example, of the nearly 500 suspects identified in U.S. human trafficking cases between Jan. 2008 and June 2010, 80% were people of color, and more than half (62%) were black.[1] In another study, between 2010 and 2012, more than 85% of the men arrested in Chicago for buying sex were either Black or Latino.[2] Furthermore, men of color are the demographic most likely to receive long prison sentences when convicted of human trafficking offenses.

These racial biases extend to women and girls in the sex trade, as well. For instance, in 2014, 94% of the defendants charged with loitering for the purpose of prostitution in Brooklyn, New York’s Human Trafficking Intervention Court were Black,[3] and FBI statistics indicate that over half of the minors arrested on prostitution charges in the U.S. are Black.[4] Notably, since prostitution is a criminal offense almost everywhere in the United States, when a person is detained on suspicion of prostitution, law enforcement holds enormous discretionary power to decide whether to recognize them as a victim of human trafficking or a criminal offender.

Even when they are recognized as a victim of human trafficking, it is not uncommon for victims to be handcuffed, detained, and even arrested and charged with crimes, under the pretext of helping them. The “arrest to assist” model of antitrafficking justifies these punitive actions as necessary to protect trafficking victims from their abusers and to connect them with services.

I think we need to question both sides of the criminal justice-centered response to human trafficking that the rescue paradigm endorses: (1.) the notion that ending trafficking requires tough anti-trafficking laws that dole out severe criminal penalties to punish traffickers and (2.)the thought that the best way to help trafficking victims is by arresting people in the sex trade, so they can be recognized as victims of human trafficking and connected with services. These conjoined strategies are intended to end human trafficking, but is the actual impact of these policies what we intend and imagine? And is the logic of punishment these strategies enact consistent with our values, as followers of Jesus? I think they are not.

According to the Sentencing Project, the U.S. has more than 2 million people in its jails and prisons, making it the world’s leader in incarceration.[5] Another approximately 65 million citizens have criminal records. The widely acclaimed book “The New Jim Crow” by Michelle Alexander explores how the phenomenon of mass incarceration functions as a system of racialized social control. Alexander’s analysis has been instrumental in helping many Americans recognize mass incarceration as a problem of social injustice.

Although mass incarceration and human trafficking are not issues that are frequently thought about together, that is precisely what we must do.  Thinking about them together helps us recognize the recent proliferation of anti-human-trafficking laws as part of the larger trend of rapidly expanding actionable criminal offenses generally since the 1980s — including the criminalization of drug use, poverty, undocumented workers, and certain categories of migration, rape and domestic violence. Thinking about them together helps us see that human trafficking is not a righteous exception to this trend, but a prime example of how social consent to the underlying dynamic that mass incarceration, and the logic of the prison industrial complex on which it depends, is manufactured. Thinking about human trafficking and mass incarceration together is uncomfortable, but doing so makes it possible to recognize how efforts to end human trafficking unwittingly perpetuate racism and play into the interests of the prison industrial complex.

I’m not saying there’s no legitimate role for the criminal justice system to play in responding to human trafficking, but the ability of punitive carceral interventions to solve complex social problems, like trafficking, is limited. We can’t arrest and jail ourselves to safe, thriving and just communities. The rescue paradigm keeps our collective attention focused on the task of locating individual perpetrators in an endless game  of whack-a-mole, while occasionally, rescuing an exceptional victim or two.

Attention and effort in antitrafficking efforts should be redirected to focus on these things, because as long as these underlying social conditions that produce situations of trafficking continue unabated, trafficking will remain a problem in our communities, no matter how many traffickers are arrested or how many victims are rescued. Shaping a world in which trafficking has no place means building societies oriented to the flourishing of all.

“Continue to remember those in prison as if you were together with them in prison, and those who are mistreated as if you yourselves were suffering.” — Hebrews 13:3 (NIV)