A peaceful scene grows in Oakley 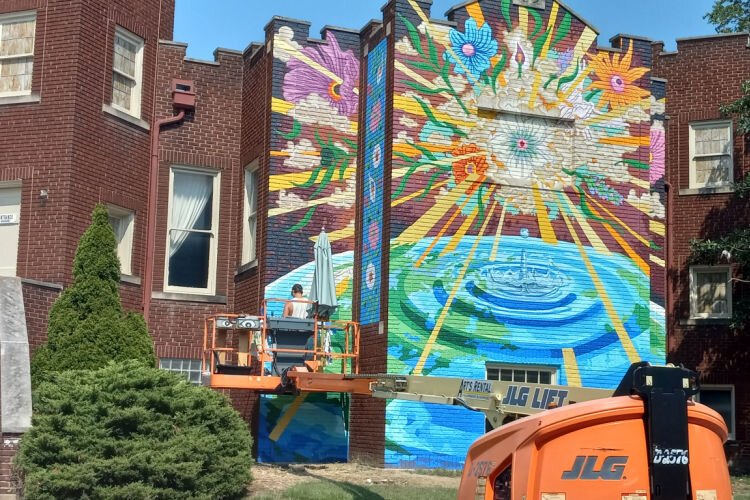 The decline in church attendance and the influence of religion on American culture has been well documented. A Pew Research Centers study offered the latest salvo about the decline of the Church in the U.S. It stated that, as of 2020, approximately 64% of Americans identify as Christian (the number was 90% in 1970), and according to Pew Senior Researcher Stephanie Kramer as quoted in an NPR report, the percentage tracks to be 35-46% by 2070.

To bring people back to church, faith leaders must change the narrative. Faith leaders must adapt their messaging to reflect that many individuals want to enhance spiritual leanings with intellect and the increasing impetus to act to help create a more just world. And in lieu of dogma and admonitions to achieve a standard of perfection in personal conduct, churches must embrace the possibilities that faith in a higher power enables.

Cincinnati Mennonite Fellowship (CMF), a small Oakley (Ohio) church with approximately 80 members, may manifest this possibility by hiring artist Christian Dallas to paint a mural that will make a powerful statement to the church’s neighborhood. Entitled (by a church vote) “The Beauty of Peace,” the approximately 500 sq. ft. mural spans three walls that face Minot and Brownway streets (near Sleepy Bee and Baba India). 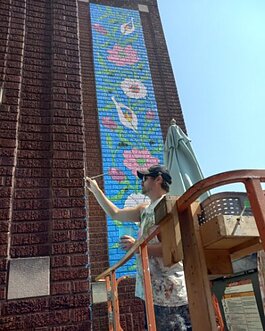 Artist-muralist Christian Dallas earned a BFA in painting from Northern Kentucky University and has painted professionally for 10 years. He credits artist Tim Parsley with mentoring him in painting large-format murals. This is the second church mural that Dallas has painted. Dallas grew up in the Lutheran church and was an active member of Young Life, an evangelical Christian ministry that focus on high-school and college students, so he enjoyed the opportunity to express his faith through his work.

Unlike his first church mural for a Northern Kentucky Sunday school classroom, the CMF mural is not a literal interpretation of a Bible story or parable. Dallas said the CMF Church Council, its governing body, wanted to embody love, hope, peace and outreach with this writ-large artwork.

“I wanted the art to embody the ripple effect, the actions have a cause and effect, and deeds don’t go unnoticed,” Dallas said.

As he began designing for this mural project, Dallas said he wanted to represent CMF’s main goals: reflecting community outreach and helping the community understand CMF’s core values of peace, welcome, and social justice. He noted, “This gave me the inspiration for this ripple, starting from a single drop and expanding [until] it reaches the whole planet.”

Another focal point of the mural is the white Christmas rose, which represents Jesus as the spiritual center of the church’s values. The beams of light it emanates fulfill several roles within the mural. They manifest prayers as sacred communication between people and God, and a beacon guiding those in need.

Other key thematic elements include lavender, lilies, a white dove and an olive branch, which represent peace, and black-eyed Susans and jasmine flowers, which represent justice. These underscore Dallas’ goal to create a layered mural that would allow viewers to interpret the message and internalize its spirit, even if some of the symbolism is unfamiliar.

Dallas drew inspiration from his own and the church’s vision; executing his concept required considerable perspiration. He labored on the mural for five weeks and noted that this was the roughest brick surface he’d ever encountered. But, with Luxon primer, Novacolor acrylic outdoor paint and a liberal quantity of persistence, Dallas completed the mural. While this writer spoke with Dallas and took pictures, a passing motorist stopped and asked about the mural and a building. She was unaware that the building was a church – mission accomplished.

Brian Moll, CMF’s pastor, said, “As a church committed to peace, justice and building God’s beloved community, we invite everyone in the neighborhood to consider how exercising our gifts can lift the spirit of our city to unimaginable heights.”

He continued, “Leo Tolstoy wrote, ‘Art should cause violence to be set aside and it is only art that can accomplish this.’ Imagine with us, a world without violence, one filled with the beauty of peace.”

The views and opinions expressed in this blog belong to the author and are not intended to represent the views of the MC USA Executive Board and staff.