War tax resistance: a letter to the IRS 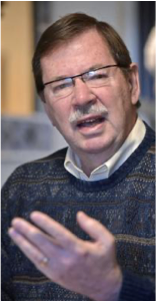 Harold A. (“H.A.”) Penner is a native of Beatrice, Nebraska,  and currently resides in Akron, Pennsylvania, where he is a member of the Akron Mennonite Church. He has been war tax resister/redirector for the entirety of his professional life. He served as the Mennonite Church USA (MC USA)  representative on the board of the National Campaign for a Peace Tax Fund from 2009-2016 and convenes the 1040 For Peace war tax resistance group that initiated the 2015 MC USA “Faithful Witness Amid Endless War” resolution. In 2019, H.A. was instrumental in the renewal of the Mennonite Church USA Peace Tax Fund.

Editor’s note: H.A. and Barbara Penner sent the following letter to the IRS with their 2021 federal income tax forms. Other recipients of this letter included the president of the United States, Akron Mennonite Church, and U.S. congress people and senators representing their home state of Pennsylvania.

We conscientiously object on religious grounds to the payment of that portion of our federal income taxes that supports war making and militarism — 47% of the U.S. budget for the 2021 fiscal year according to the War Resisters League. So we have redirected 47% of the levy elaborated on our 2021 federal income tax forms to our church — the Akron Mennonite Church in Akron, Pennsylvania — to be used in its peacebuilding activities.

Martin Luther King Jr., in a sermon at Riverside Church on April 4, 1967, said, “A nation that continues year after year to spend more money on military defense than on programs of social uplift is approaching spiritual death.” We do not want our federal tax dollars to be used to underwrite an out-of-control military machine that is destroying God’s creation while legitimate human needs go unmet. A recent study by University of Massachusetts economists indicates that infrastructure spending creates one and one-half times the number of jobs per dollar compared with those invested in the Pentagon.

The United States is the leading purveyor of arms sales, global warfare and militarism. With some 800 military bases in 80 countries around the world, the U.S. has a larger military budget than the next ten countries combined, as well as a weapons industry that dominates the global arms trade. The London-based International Institute for Strategic Studies reports that the U.S. currently spends four times what China does and 10 times what the Russians sink into their militaries.

If your product is a weapon, your market is war. Militarized America makes war our method and weapons our instruments. While we live in a troubled and dangerous world, neither handguns nor nuclear arsenals are ways to solve human problems. Our children are mimicking the behavior of adults who kill to solve their problems, resulting in the violence found in our homes, in our schools and on our streets.

We are not opposed to paying taxes. We willingly pay that portion of our tax liability that goes toward peace-oriented systems and supports life. But we are religious conscientious objectors to the death and destruction that the U.S. military apparatus represents and are compelled as disciples of Jesus to take this action.

We urge you and the U.S. Congress to pass the Religious Freedom Peace Tax Fund Bill (H.R. 4529 in the 117th Congress) that would restore the constitutional right for individuals to practice religious beliefs according to their consciences. To that end we welcome dialogue with you.

Harold A. Penner and Barbara A. Penner

“Every gun that is made, every warship launched, every rocket fired signifies, in the final sense, a theft from those who hunger and are not fed, those who are cold and are not clothed.” — Former General and President Dwight D. Eisenhower

Learn more about the economics of war and how others resist paying for war in this webinar.

Donate to our Peace Tax Fund.