Entitled “Defund the Police? An Abolition Curriculum,” the free, nine-week study program challenges participants to think creatively about personal and community safety in a Biblical context. 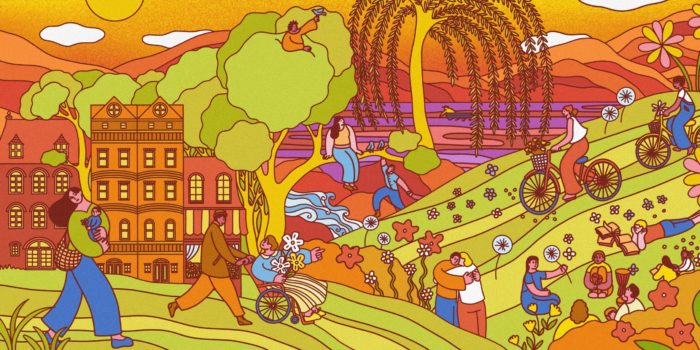 According to MC USA Executive Director Glen Guyton, the curriculum was developed in response to calls from clergy and congregations for an Anabaptist-oriented response to the continued brutalization of Black, Brown and Indigenous people, as witnessed by continued high profile police shootings across the United States.

“As Anabaptists, we are called to extend God’s holistic peace,” said Guyton, “even when the state sanctions violence and injustice. As our police force adopts the tools and tactics of our military, we as peacemakers need to think deeply about the intersection of our theology and our view of community policing.”

Sue Park-Hur, MC USA’s denominational minister for Transformative Peacemaking, will host an introductory webinar on the curriculum on April 29 at 7 p.m. EDT, featuring a panel discussion with the program’s authors. Register here.

The interactive course is positioned as “an initial guide for congregations who are desiring to begin or continue their reflection on what it means to engage the forces of state, their commitments to non-violence and how to act to end policing and police brutality.”

Rooted in scripture, the curriculum utilizes audio and video storytelling, hands-on activities and discussion prompts to explore topics, such as:

“Police abolition is a process that requires communities to create alternatives to policing,” said Guyton, noting that this aspect of “defunding the police” is often misunderstood. “We hope this curriculum will educate, inform and transform our thinking concerning justice, mass incarceration and how we live in harmony as a society.” He said that this discernment is consistent with the denomination’s position as a historic peace church and its approach to war, the military-industrial complex and military service.

Pastor Melissa Florer-Bixler of Raleigh (N.C.) Mennonite Church, one of the authors of the curriculum, acknowledges that the topic initially may make some participants feel uncomfortable. “Our imaginations are so shaped by policing that it is almost impossible to imagine other ways to keep us safe,” she said. “It will be uncomfortable until you get into what that really means.” She explains that the curriculum looks at practical alternatives, such as shifting spending from policing to providing drug rehabilitation, raising the minimum wage and increasing counseling at schools.

The curriculum was developed by a diverse team of Anabaptist writers and abolition experts, including:

The curriculum features an integrated facilitator’s guide and is ideal for use in virtual or online adult Sunday school classes, Bible studies, small/cell groups, family groups or even as an individual study.

“We hope people feel empowered by this curriculum,” said Florer-Bixler. “Abolition is not just an ending; it’s about building a different kind of world. Wherever people are in their journey of disengaging in state violence, we hope that this would move them a few steps ahead.”

“Defund the Police? An abolition curriculum” is one of several peacemaking initiatives introduced by MC USA in the past year. Other initiatives include:

Mennonite Church USA is the largest Mennonite denomination in the United States with 16 conferences, approximately 530 congregations and 62,000 members. An Anabaptist Christian denomination, MC USA is part of Mennonite World Conference, a global faith family that includes churches in 58 countries. It has offices in Elkhart, Indiana and Newton, Kansas. mennoniteUSA.org

Confession of Faith in a Mennonite Perspective, Article 22 – Peace, Justice and Nonresistance

Defund the police is deeply Anabaptist, a Menno Snapshots blog