The Executive Board (EB) of Mennonite Church USA (MC USA) approved a $1.4 million budget for the 2021-2022 fiscal year, announced a special delegate session for May 27-30, 2022 in Kansas City, Missouri, and reviewed several proposed resolutions during its meeting on April 16 and 17, 2021, via videoconference. 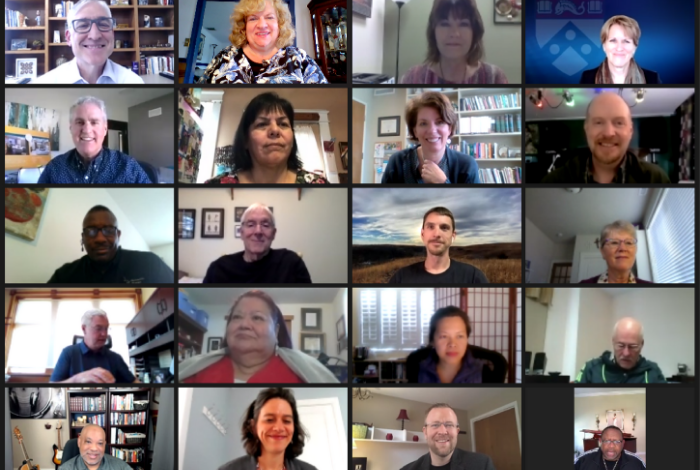 Executive Director Glen Guyton addressed denominational finances in his opening report to the EB. “We are doing well in terms of finances,” said Guyton. “We are in a better cash position than we have been in a number of years.” He attributed this, in part, to savings of $150,000 from reduced travel during the pandemic and the generosity of Everence in providing its annual contribution to the denomination as a “first fruits” payment in the beginning of the fiscal year.

Guyton said that, because of the impact of the global pandemic, he anticipated a significant loss related to the denomination’s biennial MennoCon21 convention July 6-10 in Cincinnati, Ohio, but added, “We have managed our funds well, and we will be able to draw from our reserves.”

He also provided an overview of recent giving campaigns, including a year-end appeal that resulted in more than $13,000 in donations and the month-long, collaborative Spring It Forward campaign with MennoMedia and Mennonite Education Agency (MEA), which raised an estimated $7,625.

The EB also voted unanimously to send its proposed resolution “to retire the denomination’s Membership Guidelines as active polity in Mennonite Church USA” to a future Delegate Assembly for final deliberation. (See news release here.) According to the denomination’s guidelines for developing resolutions, the Resolutions Committee or the Constituency Leaders Council (CLC) may not prevent a resolution submitted by the Executive Board from being submitted to a Delegate Assembly. Read the full text of the proposed resolution here.

In a closed session, the Executive Board discussed and provided feedback to the Resolutions Committee on three additional proposed church statement resolutions from the constituency:

The Resolutions Committee will consider this feedback and the feedback from the CLC in determining whether to recommend these resolutions for deliberation by the Delegate Assembly.

In a separate motion, the EB voted to hold a special session of the Delegate Assembly on May 27-30, 2022 in Kansas City, Missouri. Resolutions forwarded by the EB and the Resolutions Committee will be deliberated at this special delegate session.

For stewardship purposes, the CLC and Executive Board meetings will be held in conjunction with the special Delegate session.

Mennonite Church USA is the largest Mennonite denomination in the United States with 16 conferences, approximately 530 congregations and 62,000 members. An Anabaptist Christian denomination, MC USA is part of Mennonite World Conference, a global faith family that includes churches in 58 countries. It has offices in Elkhart, Indiana and Newton, Kansas.  mennoniteUSA.org