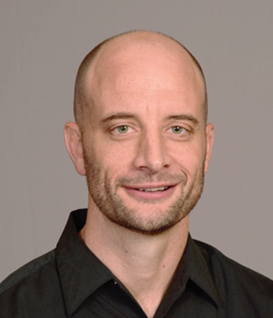 Joel Miller is the lead pastor of Columbus Mennonite Church and a graduate of Anabaptist Mennonite Biblical Seminary. He and his wife Abbie have three school-aged daughters and seven backyard chickens.

This was a favorite phrase of my friend Ruben Castilla Herrera. He had heard it from his mentor Cesar Chavez with whom he had worked organizing farm laborers.

Ruben would say these words in groups small and large, with a mix of moral conviction and exasperation.

It was through Ruben that our congregation met Edith Espinal and it was through this encounter that we became a sanctuary church.  Edith was born in Mexico, came to the U.S. as a teenager with her father, and is a mother of three. After her asylum case was rejected by a judge, she was given a deportation order. Faced with the possibility of being separated from her husband and children, two of them U.S. citizens, she chose to risk remaining with her family over following the deportation order.

A church building is one of the few places ICE (U.S. Immigration and Customs Enforcement) has agreed they will not enter. We made a space for Edith, and she moved in.

Three years later, with her legal status still unresolved, Edith is still in sanctuary – able to see her family, but unable to move about freely. News articles frequently refer to her as an immigrant, which she is. ICE classifies her as a fugitive.

Ruben’s mantra demands a different primary identifier: “These are people!”

It’s a strange thing to have to say. It implies that we frequently forget a most basic reality, and that this forgetfulness is a threat not only to others, but to our own humanity.

There are over 11 million undocumented immigrants living in the United States, many with stories like Edith. But our brains don’t seem all that impressed with numbers. These are people, but what impresses our brains are relationships with particular people.

One of the aspects of sanctuary work is that it brings into sharp focus the value, the wonder, the gift of a single life, a single family.

To modify Ruben’s statement: “This is a person.” When we hold signs that say “Families Belong Together,” we have the face, story, and personalities of a particular family in mind: Edith, Manuel, Isidro, Brandow, and Stephanie.

Jesus’ favorite title for himself was “The Human One.” Was this a strange thing for Jesus to say, or was it at the heart of his message? Jesus related with humanness and humanity not primarily as a problem to be solved, but as an achievement of God, a gift to be embraced.

Our national immigration policies are profoundly inhumane, an affront to the achievement of God in the lives of individuals and families.

Edith has been a gift to our congregation and the wider community. In choosing to become a fugitive-in-sanctuary on behalf of her family, she reminds us that we also have choices about our humanity.

Do we wish to be the kind of people whose country invests resources in separating families, or do we wish to be led by the moral courage of those families’ determination not to allow injustice to diminished their personhood?

Ruben died last year, and we miss him. His words, and people like Edith, are a living witness to the Human One.