Edith Espinal was finally able to return home for the first time after living in sanctuary at Columbus (Ohio) Mennonite Church for more than three years. The mother of three was undocumented and living in Columbus with her family when she received an Order of Removal in 2017, which led her to seek sanctuary. On Thursday, Feb. 18, 2021, ICE officers granted Espinal an Order of Supervision, providing her with the freedom to safely leave sanctuary after 40 months.

Joel Miller, pastor, shared the good news in a letter to the Columbus Mennonite congregation:

“Today Edith is able to leave the sanctuary of the church to live her life with her family. This is an answer to months and years of prayer. It’s a result of Edith’s patience and persistence, and the support of this congregation and wider community.

“So how did this happen?

“Soon after the new administration began, Edith, along with a number of others in sanctuary, applied to the local U.S. Immigration and Customs Enforcement (ICE) office for a stay of removal – an official pause to her order of deportation. Like other times, this application was denied. But, unlike other times, the ICE office followed up with us, suggesting a path forward for Edith. The catch was that Edith would need to report in person. 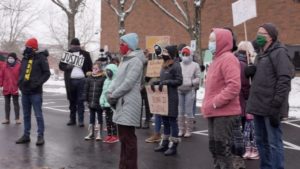 Supporters wait for Edith Espinal outside the ICE offices in Westerville, Ohio. Photo by Elisa Leahy.

“After careful consideration with her attorney, Edith decided to take this risk. [That] morning a group of us [from CMC and the community] gathered outside the ICE office. Six of us were able to go in and meet with four ICE officers. They had reviewed her case once again and, in line with the new administration’s directives, Edith is not considered a priority for removal.

“Edith is now under an order of supervision, a fairly standard arrangement. She will do a monthly check-in with her ICE case manager, which simply involves sending a picture of herself tagged with GPS through an app. Every four months, she will do an in-person check-in, which could become less frequent in future years, if she complies with check-ins.

“In the meantime, she is able to live at home, shop, dine, move about without being monitored, travel outside the state and get a work permit. This also gives her time to pursue more permanent status. Although there are no guarantees, we are quite optimistic that she is not under threat of detention or deportation under this administration.

“In short, while not being the final answer to her needs, today is big. Edith was, of course, relieved, tearful and overjoyed with what transpired.

“Edith was in sanctuary 40 months. With Lent just beginning, I’m mindful that this is a season of 40 days, mirroring Jesus’ 40 days in the wilderness and the Israelites’ 40 years in the desert. After 40 years comes the promised land. After 40 days of Lent comes Easter. After 40 months of sanctuary comes a new-found freedom and family reunion. Edith is sleeping at home tonight. We’re all celebrating resurrection a little early this year.” 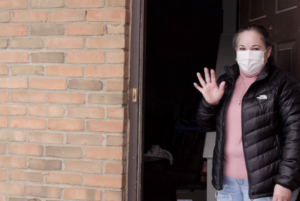 In an interview, Miller said, “Edith’s patience, persistence and perseverance are at the center of this.” He added that he is thankful to the Columbus Mennonite congregation for opening their doors to provide sanctuary to her, noting that it “speaks volumes about the soul work that they have done.” Espinal was unavailable for comment.

He also expressed thanks for local support: “Our community rallied around Edith, including our neighbors, our city, other faith leaders and a core group of supporters who worked directly with her.”

Donations to the Espinal family can be made here.

Columbus Mennonite Church is a congregation of Mennonite Church USA (USA). MC USA is the largest Mennonite denomination in the United States with 16 conferences, approximately 530 congregations and 62,000 members. An Anabaptist Christian denomination, MC USA is part of Mennonite World Conference, a global faith family that includes churches in 58 countries. It has offices in Elkhart, Indiana and Newton, Kansas.  mennoniteUSA.org

FIND RESOURCES TO LEARN, PRAY, JOIN FOR IMMIGRATION JUSTICE
DONATE TO IMMIGRATION JUSTICE
Official comments policy for users of Mennonite Church USA’s websites and other social networking tools. We reserve the right to remove any comment that violates this policy. Comments are moderated. Comments with any content that is deemed obscene, libelous, defamatory or hateful toward an individual or group will not be approved. Comments will remain open for 10 days.